Remembering the day of his daughter’s wedding, the father of the bride said that, even though it was September 6th, it was baking out and sunny—and so hot you could have walked into the lake.

Niagara’s only lakefront winery (Konzelmann Estate Winery) was the spectacular setting for the wedding of Hollie and Rodney a few seasons ago but still remembered very fondly by all who attended.  After the ceremony on the waterfront, the bridal party and guests moved inside for the reception on a lovely September afternoon that felt more like the height of summer.

“We wanted an orthodox Jewish wedding, although it was an interfaith ceremony, and we called a few people looking for an officiant,” says Peter, Hollie’s father. “Rabbi David Gellman was by far the best choice.” It was important to have the chuppah, ketubah, and other Jewish elements and everything was discussed and neatly woven into the ceremony exactly as the couple wished.

The ceremony was truly a family affair—Hollie’s brother Benjamin and his wife Mia, a musical collaborative duo known as Azalea, provided prerecorded music for the ceremonial procession and performed live for the first dances after the ceremony and before dinner in the reception hall. 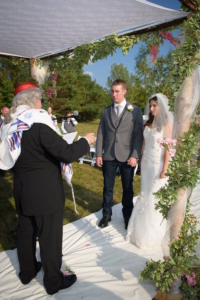 family is from the Maryland area, in the U.S. So Niagara was a perfect gathering spot, easy to reach for guests from Maryland and around Ontario. One of Hollie’s cousins also flew in from Adelaide, Australia—so it was truly an international guest list.

The bride and groom had known each other for about five years after meeting at Seneca College. Rodney is in the fire protection business. As it turns out, one of the best courses in this field in North America happens to be at Seneca in Toronto—where Hollie was then taking an aesthetics course. They had a long-distance relationship for a while and now, a few years beyond what Hollie describes as an “amazing ceremony” are happily settled outside Washington D.C. where Hollie keeps very busy as a young mom. “We now have a lovely grandchild—a little boy,” says proud grandfather Peter.

Asked about the wedding, Hollie says, “It is hard for anything to stand out since everything was so perfect! Both David and Alex attended—and were punctual, very friendly, looked fantastic, and extremely well-organized. David spoke very clearly and explained things as he went along, which helped people who hadn’t experienced a Jewish wedding before.  The ceremony was very inclusive and everyone was able to participate. Parents helped with readings—it was all amazing and perfect and detailed beautifully,” says Hollie.