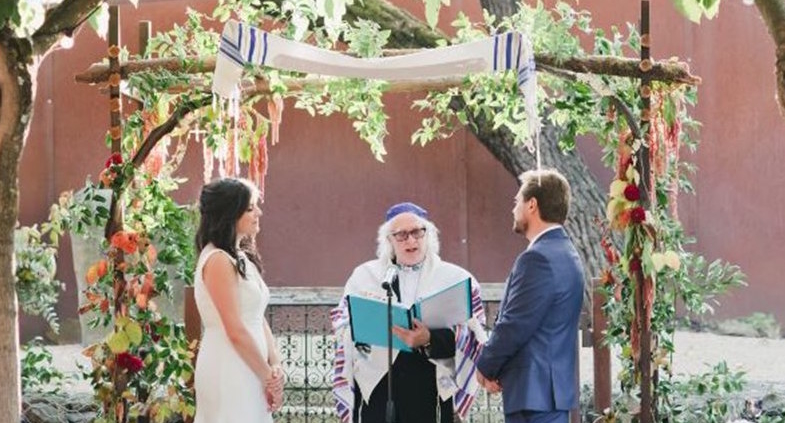 Brett and Arthur enjoyed a wonderful wedding ceremony in October when they were married in the lovely surroundings of Healdsburg, in California’s Sonoma region, by Rabbi David Gellman.

“It was an interfaith wedding—Arthur is from England and it was important to have a ceremony that paid homage to both Christian and Jewish traditions for the families, and also was personalized exactly the way we wanted it,” recalls Brett.

“There were a number of special Jewish elements we wanted to include such as the Ketubah, seven blessings, smashing the glass, wine, and the Chuppah. 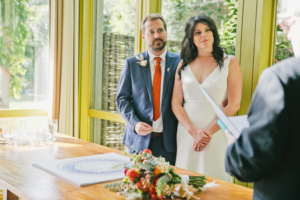 Whatever we did decide was very meaningful and special to us. I carried the corn dolly Arthur’s mother had once walked down the aisle with at her ceremony in England and that his grandmother before her carried at her marriage.”

Arthur is from Sevenoaks in Kent, and Brett calls America’s key wine county home. The couple met in 2010 and were co-workers and good friends for a long time—until a change in employment opened the door and saw the friendship change as they became a couple. Brett and Arthur both work in biotech in food technology and live in the Bay Area.

“We wrote our own vows. Arthur felt very strongly about doing this,” says Brett, “and we were very pleased. They were perfect.”

The wedding was held at a lovely restaurant venue in Healdsburg, which is always on the list/wins awards as one of the 10 top small towns in the US and is the home base for three of California’s top wineries.  The ceremony took place outside, where the weather was wonderful (for October!) and for the 130 or so guests. Then everyone moved inside for cocktails—and the day ended with dinner and dancing on the patio.

“The ceremony was everything we could have wished for. Rabbi Gellman did a wonderful job. In the spirit of transparency—I have to say that I woud have wanted David as our wedding officiant even if he hadn’t been my dad’s second cousin! He married my brother and sister-in-law a few years ago in Savannah, Georgia. It was a beautiful wedding, and I wanted the same for us.”